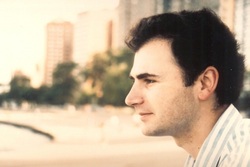 Dejan Stojanovic, Chicago, 1991
Dejan Stojanović was born in Pec, Kosovo (the former Yugoslavia), in 1959. Although a lawyer by education, he has never practiced law and instead became a journalist. He is a poet, essayist, philosopher, and businessman and published six critically acclaimed books of poetry in Serbia: Circling, The Sun Watches Itself, The Sign and Its Children, The Shape, The Creator, and Dance of Time.

In 1986, as a young writer, he was recognized among 200 writers at the Bor (former Yugoslavia) Literary Festival. He also received the prestigious Rastko Petrovic Award from the Society of Serbian Writers for his book of interviews with major European and American artists and writers.

In addition to poetry and prose, he has worked as a correspondent for the Serbian weekly magazine Pogledi (Views). His book of interviews from 1990 to1992 in Europe and America, entitled Conversations, included interviews with several major American writers, including Nobel Laureate Saul Bellow, Charles Simic, and Steve Tesic.

He has been living in Chicago since 1990.